We have worked with our client bringing two new products into the marketplace and used this technology in two key ways.

The first was for a spectrometer to go into schools to teach about the light spectrum. Our client needed the existing 3D CAD models printing so that they could present to the client before committing to the expensive tooling for the production run of thousands. Because it was produced in ABS it was tough enough to be sanded and sprayed so that it looked more like the final product. Their client loved it and it is now in production.

The second was for another new product. It is for a machine that is used to treat acne. The product is already used to treat cold sores. There is a difference in the cap for the new application. We produced the models to the original brief and for various reasons it went through several stages of fine-tuning of the design in quick succession, as happens when designing. This process was sped up considerably because we were able to respond quickly with the changes. It would have been better still if we had had the machine in the office. We found this frustrating, but it’s a stage we have to make do with whilst the economic climate settles down. 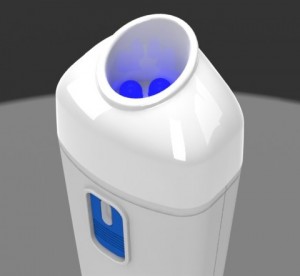 Warning: Invalid argument supplied for foreach() in /home/catwards/public_html/wp-content/themes/healthpress-theme/sections/twitter.php on line 85